Network unable to cope with flags

Sometime ago raised two flags of clearly two SPAM answers, explaining why the reason for the flag. Turns out the flags aged away and once that happened the answers disappeared from the site. They had the following links

How to decide which quality methodology for Business IT projects?

Can Lean Six Sigma be implemented in a Service-Oriented Company?

Recently, raised another two flags of two "answers" that are at most only comments as you can see next

How can I use Agile in a telecommuting environment?

Is it ok to define a user story that has no real business value without another story?

It seems to go the same path as the previous two as you can see in the next image. 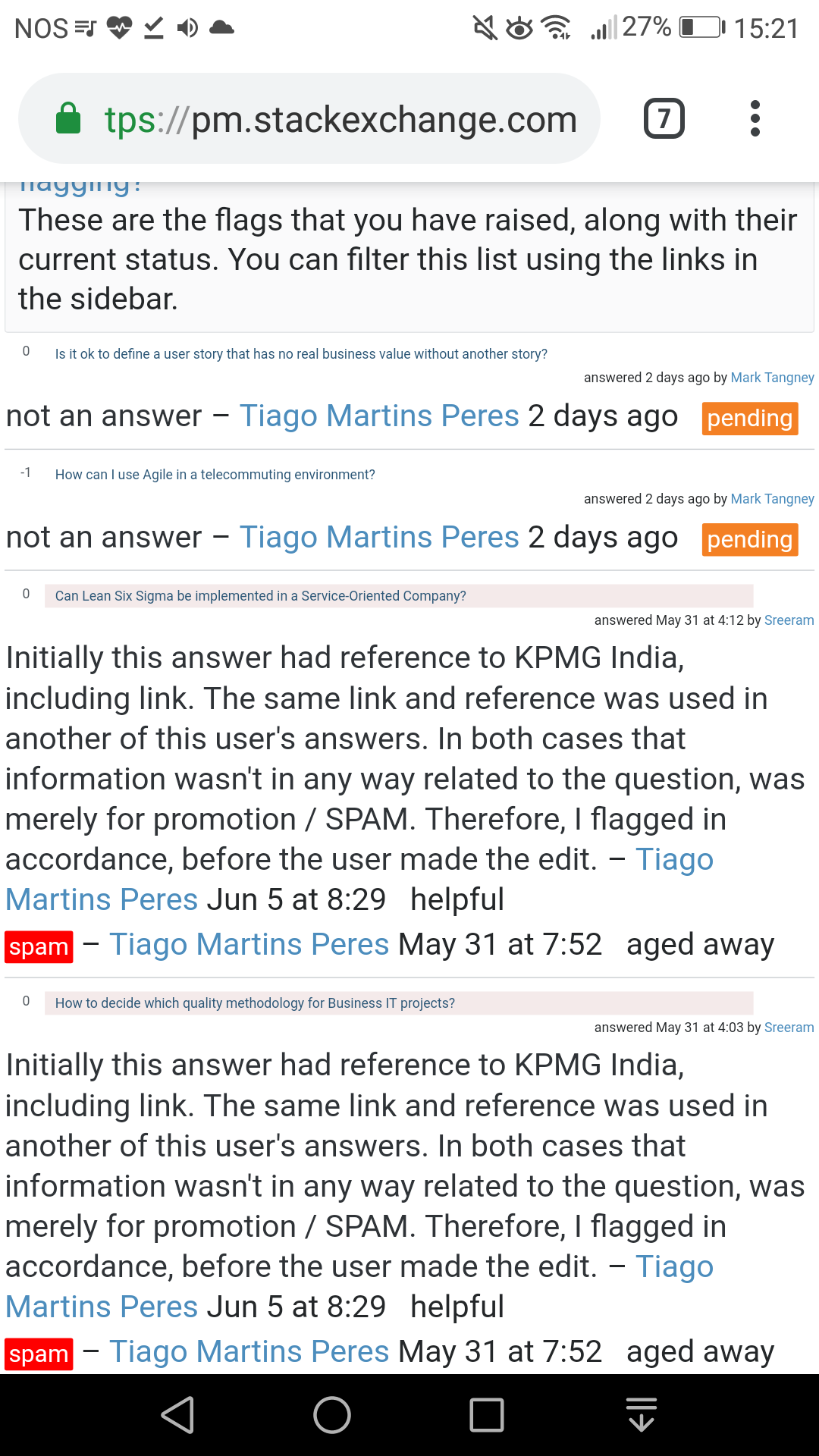 Would like more feedback here because something in this network isn't working the way it should.

What Happened to the Spammy Posts

The two posts you referenced were addressed by the community, but insufficient action was taken by users with sufficient voting privileges. I eventually deleted those questions outright, rather than treating them as spam, for the reasons outlined in the accepted answer to a related meta question.

Flags can and do age away. This is by design. Long-time users of Stack Exchange might worry about flag weights associated with incorrect flagging or flags that lack critical mass or moderator action. Don't.

Flag-related hell-bans and flag weight in general have been gone for a long time. I don't even think there are any consequences at all for flags that age away, but if you run across some please raise them on meta or contact SE support, as they shouldn't exist.

Mostly, flag aging is a reflection of our (relatively) small community, and the fact that moderators try not to get involved too early because (most of) our votes are binding. So, in many cases, low-eyeball issues that haven't attracted critical mass will age away, but helpful flags remain helpful even if they are not longer counted towards critical voting mass. They help moderators and staff down the road, even if they don't solve a problem today.

In short, I can't see much of a reason to worry about flag aging. If you think something needs more attention than it's getting, bring it up on meta!

I didn't look closely at your other examples, except to note that they are newish. The flags are less than a week old, and on this particular site even the avid users are generally out of pocket nights and weekends. So, you need to give the community (meaning all the users with access to the review queue) a chance to review the flags. There are flaggable problems that need immediate action, but in my opinion "low-quality answers" aren't among them.

On a side note, "not an answer" is also intended for posts that are off-topic or (most commonly) attempts to comment or ask related questions rather than answer the original post. It's not the right flag for answers that can be improved, or even questions that are factually incorrect. Bad answers need to be policed by the community as often as possible, and diamond moderators are here to handle the cases where the review system or voting system lacks critical mass.

I often see "not an answer" used incorrectly, and at least one of the questions you flagged would seem to fall into this category. That doesn't mean the flagging itself was invalid; it just means moderators may not take action on an incorrect flag, and the community may not agree with your flagging reason.

Overall, I think you're doing a good job drawing attention to problem posts. Please don't let flag aging get in the way of your conscientious attempts to keep the site litter-free!

Not the answer you're looking for? Browse other questions tagged discussion moderation flagging .

7
This site has been in beta for years, will it ever make it out?
2
Spammy answers trimmed with edits; links remaining in edit history

5
Should We Enforce a "Back It Up" Policy In Answers?
2
Dealing with cross-site duplicates
1
How should we adapt the "What is an acceptable answer" post to fit PMSE?
3
How to deal with OT questions that you want to help with?
2
Why were my "obsolete comment" flags declined?
2
Should pm.se deal with company / startup questions?
2
Spammy answers trimmed with edits; links remaining in edit history